As a professional interpreter, startup co-founder, and angel investor, it's fair to say that three of my all-time favorite topics are: (1) language, (2) technology, and (3) finance.

That's why this afternoon was pretty much the coolest and most hilarious experience ever.

I got to attend a speech by Ray Dalio -- titan of hedge funds and godfather of radical honesty -- with instant subtitling in English and Chinese via voice-to-text and machine translation.

A reminder of why humans are still better than machines at translation? Check and mate!

Pretty much the best thing ever.

Here are a few of my favorite moments:

The event was kicked off by Wang Boming, the charismatic editor-in-chief of Caijing Magazine, the host of the day's event.

I've interpreted for Wang several times at the World Economic Forum and other finance summit, and I know him to be humorous, thoughtful, and well-connected... I had no idea, however, that he and Ray Dalio started working together way back in the 80's, when China was first exploring how to set up modern capital markets.

As he made his introduction (in Chinese), he kept saying “Ray是这样。。。Ray是那样” (Ray is this, Ray is that, etc). The problem is that the voice-to-text software they were using (yes I know which company it was, no I'm not going to say) kept interpreting it as 瑞士这样，瑞士那样 (Switzerland this, Switzerland that)!

Correct translation: Ray is a man with a dream .

Machine translation: That. One in Switzerland. Dreamer.

Pretty satisfying machine translation goof. Could even serve as abstract poetry, or lyrics to a Radiohead song!

The only thing that could have made it better (画龙点睛 if you will), would have been if the machine had somehow made a further logical connection between "Dreamers" and DACA. That would have been just perfect. 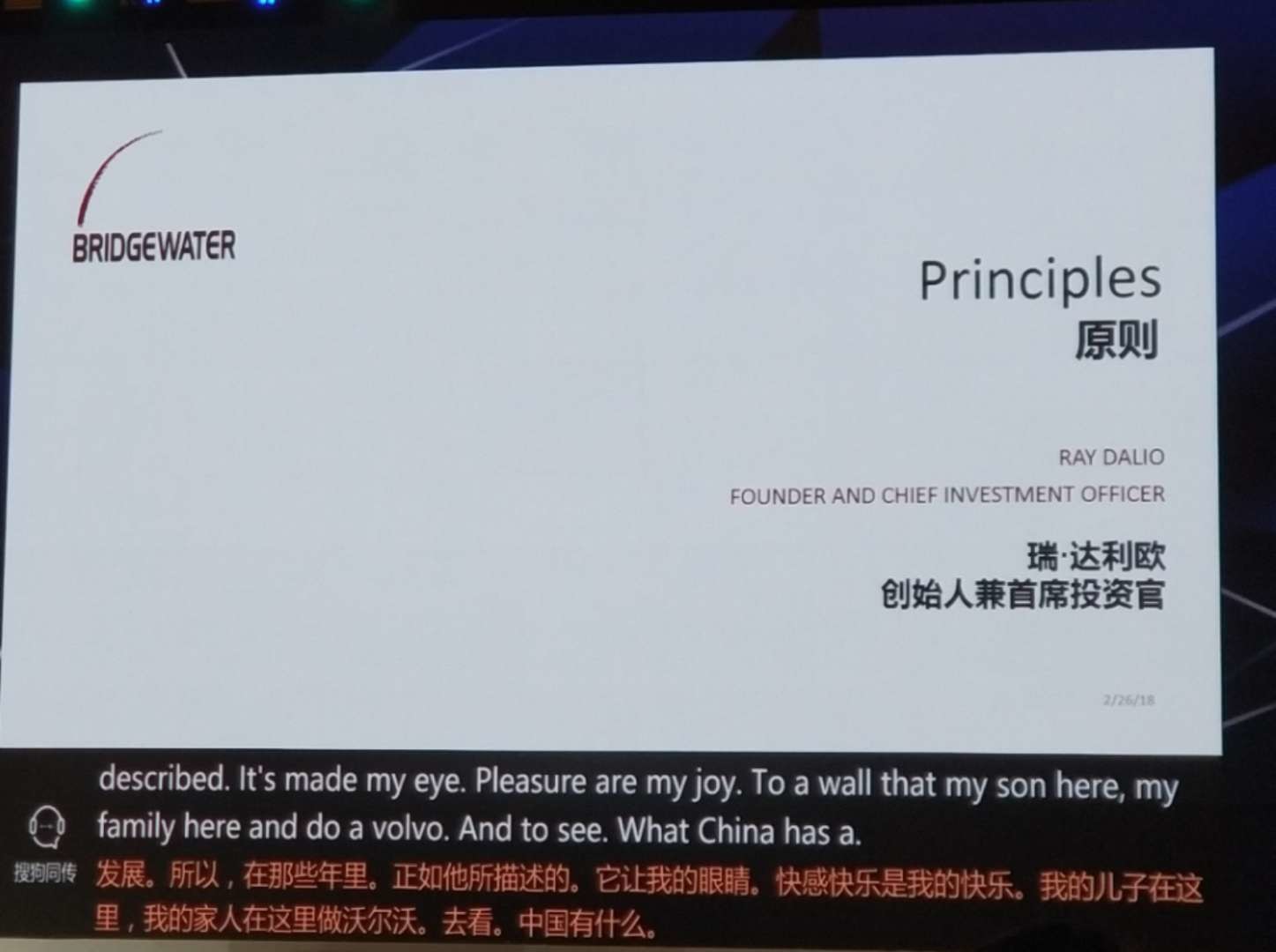 Right out of the gates and we're having tons of fun!

Dalio starts with a warm thanks to Wang Boming for inviting him to Beijing and tells a sweet story about how they met... but "I met Boming" becomes "I'm at bombing."

He continues his introduction by describing his relationship with China: he's been out here many times, he's brought his family to travel (maybe check out the Great Wall), and of course over the years he's done a lot of business out here, including possibly a J.V.

Somehow, what the machine gives us is:

"It's made my eye. Pleasure are my joy. To a wall that my son here, my family here and do a volvo. And to see. What China has a."

Remember, folks, this isn't even machine translation! It's just straight English-to-English transcription! The Chinese that comes along with it is, of course, even less intelligible.

Alright, alright... on to my third and favorite goof:

Dalio is known for a lot of things, but two of his most famous (virtues? sins?) characteristics are his aggressive hubris and his penchant for unflinching criticism and self-criticism.

So one of the more touching parts of his presentation was his story about how he bet quite publicly -- and entirely incorrectly -- on a market crash in the early 80's, embarrassing and almost bankrupting himself in the process.

"How arrogant!" he thundered to the crowd. "How could I be so arrogant?"

"How?" the subtitles asked. "Aragon, I looked at myself and i."

(Aragon is, of course, an autonomous kingdom in northeast Spain. You are thinking of Aragorn, son of Arathorn, a protagonist and eventual king in The Lord of the Rings. You really need to get it together, don't you?)

Moral of the Story

C'mon, you know what the moral of the story is!

Machines are great, we all love machines -- but when it comes to helping humans communicate with other humans across the language barrier -- ESPECIALLY for sophisticated speakers in topics such as business and finance -- you want to use the best possible technology there is... which in 2018 is still professionally trained, vetted human translators and interpreters!

So next time your executive team is making that big presentation or visiting those partners overseas, be smart -- and get the talent you need to get the message across.

Want to learn more about what's happening at the intersection of translation technology and human talent? Six cool companies in this field are joining together to launch a non-profit industry initiative to get the word out -- stay tuned for a big launch in a few weeks, and contact me to learn more about how to get involved! :-)