A 101 Guide to Comps Analysis

When Cadence gets asked to translate on a due diligence call, one of the first step we instruct our team to do is find company names most likely to get mentioned on the call.

If the call is on Tesla, you can expect people may ask about:

- Other Elon Musk ventures (SpaceX, The Boring Company, and, uh, the new one called The Brick Store)

This process is a core component of both due diligence and our preparation for our due diligence assignments. What most of my translators don't always realize is that this is just the first step of so-called comps analysis.

In my first two jobs out of college, I had to do comps tables all the time. It became a formulaic step and my brain didn't engage. I'd just take the last comps table I made and adapt it to the situation at hand.

So let's breakdown what exactly it means so that you don't fall in the trap of copying and pasting without thinking.

Comparable company analysis (comps) is just one of many ways that investors can attempt to value a company, whether public or private. Investors can use different metrics and ratios to assess and measure the value of a company against a peer, a sector, or even the broader market. The different metrics can prove useful to determine if a stock or company is over or undervalued.

An elementary comp such as the price-to-earnings ratio, or PE ratio, is the most well known and most popular among investors to use to value a company. The ratio in its purest form takes the price of a stock and divides it by the company’s earnings per share. Many of the popular comparables and ratios are calculated and work similarly.

Analysts and investors will use these comps to assess how expensive stocks may be, but to do that one needs to compare the stock to another. For example, a company like Intel (INTC) trades at a one year forward PE ratio around 10.

Strictly speaking, "10" is the amount or multiple at which investors are willing to buy Intel’s stock based on its estimated earnings for next year. An incredibly naïve but instructive way to look at this is:

4. This means that if you received the entirety of earnings per share (EPS) as a dividend, you'd earn your money back in 10 years.

5. #4 ignores the impact of dividends and the time value of money. Plus, no company would ever distribute all of their EPS as dividends.

Therefore, if one stock has a PE of 10 and the other has a PE of 30, you can reasonably conclude that the other one is expected to have faster future growth.

Note that if it were looking backwards at the prior year's earnings, this would be known as a TTM PE (trailing twelve months). You may see NTM PE which is the forward looking version.

Comps is all about looking at metrics relative to their peers. By itself, these metrics carry little if any value because there is no way of knowing if it means the stock is expensive or cheap.

Fun fact: in the header of this section "HES" refers to Hess, an energy company. It actually has negative future earnings (thanks, low oil prices!), so technically, it has a negative PE ratio.

A broad measure of the stock market, the S&P 500, trades at one-year forward PE ratio of approximately 16. It would suggest that Intel is cheap when compared to the broader stock market. However, when we compare Intel against its peers, other semiconductor companies such as Broadcom (AVGO) and Qualcomm (QCOM), one would find that Intel trades around the same PE ratio or valuation as the others. It tells an investor that Intel is cheap when compared to the stock market, but fairly valued versus its peers, making its shares not a bargain. 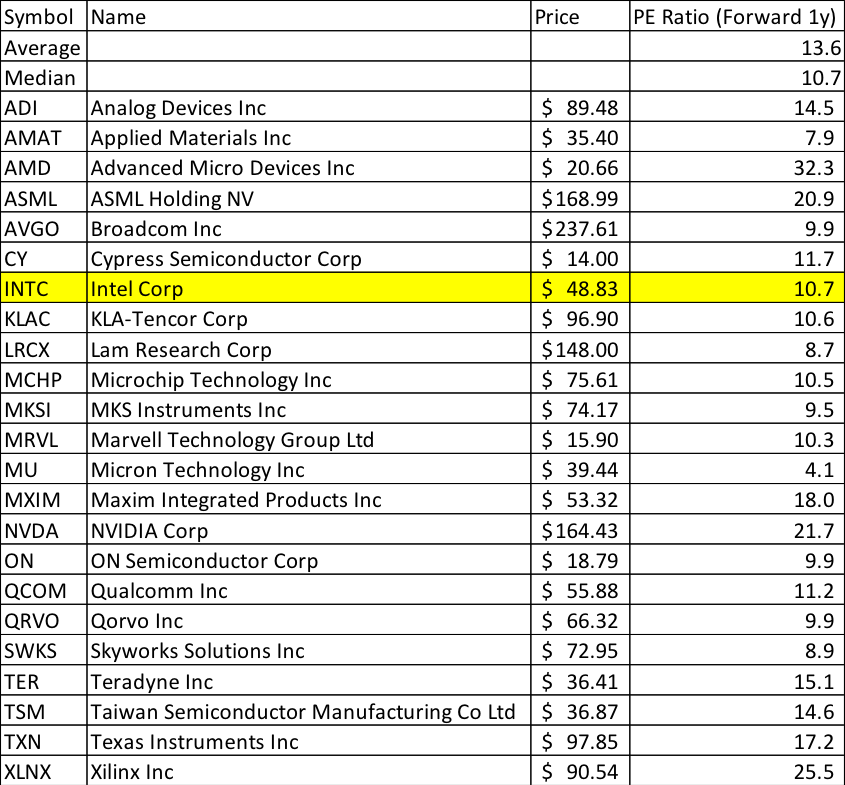 Comps can include any number of metrics, such as the price to sales ratio (P/S), enterprise value to EBITDA (EV/EBITDA), price to book value (P/BV), price to free cash flow (P/FCF), or gross profit margins. Investors will sometimes use different metrics depending on the sector.

For banks’ stocks, investors will rely on the price to tangible book value to assess the valuation of one bank stock versus another. What it accounts for is the assets on the bank's balance sheet that can be readily sold.

What is interesting about the chart above is that these lines never cross one another. These stocks are fundamentally always in a certain "order": JP Morgan is always relatively more expensive than its peers.

Let's look at two very well-known stocks: Facebook (FB) and Snap (SNAP) where we look at both ARPU and MAU.

One would find that Facebook trades at an enterprise to monthly active user multiple of $162.30. Meanwhile, Snap gets a valuation of just $37.60. At first, it would appear that Snap trades at a steep discount to Facebook but looks can deceive.

That is because Facebook generates nearly four times more revenue per user than Snap, which is why investors give Facebook a premium to Snap.

Therefore, we haven't spotted a mispricing in the market. Sorry to blow up your investment thesis.

Remember that comps analysis is a core part of due diligence and, in general, a good habit for any research project. Combined with some decent web scraping, API calling, and spreadsheet jockeying skills, you too can become a savvy researcher!