The last couple of weeks have been full of incredibly important quarterly earnings and conference calls to review. However, perhaps the most critical conference call was held by Apple Inc. (AAPL), and not simply because it is the largest publicly traded company. The conference call revealed that the company would be making some changes to the type of financial data they would distribute on a quarterly basis, most notably around the iPhone.

Investors did not react well when learning the company would no longer provide iPhone units sold on a quarterly basis. Additionally, the company reported slightly weaker than expected fiscal first quarter 2019 revenue guidance. The result was a stock that fell nearly 7% on November 2nd.

Here are my three most important takeaways from the call and subsequent Q&A. 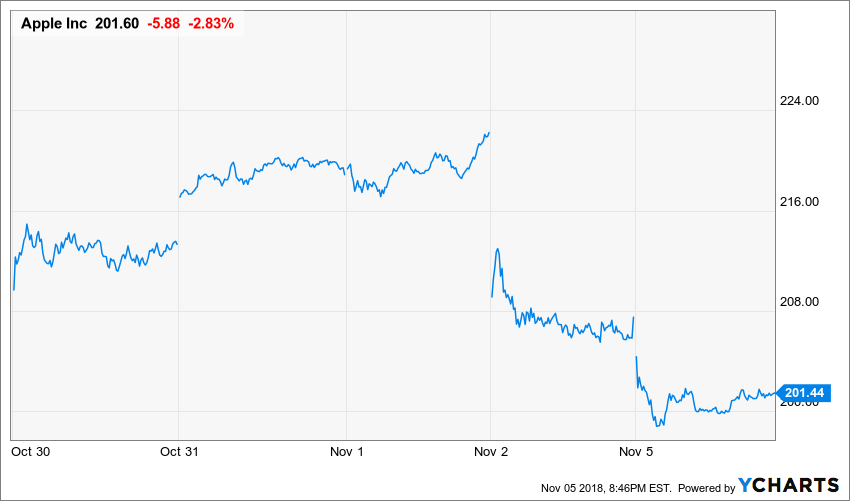 Analysts seemed to be shocked when hearing the news that the company would no longer provide quarterly iPhone unit sales numbers. There was an exchange between the sell-side analysts, Jim Suva of Citigroup Global Markets Inc., and Tim Cook, the CEO of Apple. Suva noted that Apple is likely to get pushback about not getting the iPhone units data. He even went as far as to sound the alarm that perhaps iPhone unit sales are turning negative.  Tim Cook responded by saying: “This is a little bit like if you go to the market and you push your cart up to the cashier and he or she says, how many units do you have in there? It doesn't matter a lot how many units there are in there in terms of the overall value of what's in the cart.”

Shannon Cross of Cross Current Research, LLC raised a concern that investors have gotten used to projecting iPhone sales by multiplying the units sold by the average selling price. However, Apple again pushed back, noting that over the past three years the number of units sold did not reflect the underlying strength of the business. Apple also indicated that their top competitors do not provide quarterly smartphone unit sales either.

The key takeaway from these exchanges would suggest that Apple is committing to offering the best products to their customers and driving top-line revenue higher. It seems less concerned about the number of iPhones sold. Apple’s newest iPhones have been coming to the market at higher sales prices which in turn helps to push revenue higher.

The company noted it saw a currency-related headwind of roughly $2 billion as part of its revenue guidance. It resulted in guidance of $89 and $93 billion for the fiscal first quarter of 2019, or $91 billion at the mid-point. Analysts had been looking for the company to provide revenue guidance of $92.88 billion. However, if not for the currency headwind, Apple’s revenue guidance at the mid-point would have been higher than estimates at $93 billion. Currencies fluctuate on a daily basis and that means that today’s headwinds may be tomorrow’s tailwind.

Apple sees some weakness in emerging markets such as India, Turkey, Brazil and Russia, due to a strengthening U.S. dollar. It resulted in the company having to raise prices in those markets, while growth remains slow. However, they also noted that the market in China remained strong.

During the call, the company noted their plan to start giving not only revenue by business segment, but also cost of sales, which in turn provides investors with gross margin. So, while analysts may be losing the insight of unit sales, they are gaining a critical insight with gross margins. Apple is likely trying to get investors and analysts to focus more on the higher margin parts of their business such as services. It is probably an attempt to potentially have investors re-rate the stock to one with a higher price to earnings multiple, versus its currently hardware low margin valuation.

It may take a few weeks or perhaps even a quarter for investors to digest the news of no longer having their precious iPhone unit sales data to rely upon. It will inevitably turn investors’ attention away from the minutia of iPhone units to the larger and more complete picture of the company as it continues to transform into an ecosystem that supports millions of users.